In keeping with past traditions, Chevron Bangladesh participated in the U.S. Trade Show for the sixteenth time, March 14th to 16th at the Pan Pacific Sonargaon in Dhaka. Jointly organized by the American Chamber of Commerce (AmCham) and the United States Embassy, this was the 26th edition of the event. Up to 46 organizations were represented that displayed their products and services in 74 stalls and booths over the course of the event. The inaugural ceremony was attended, among others, by the Bangladesh Minister for Commerce, Tipu Munshi, MP; United States Ambassador to Bangladesh, His Excellency Earl R. Miller; AmCham President and Vice-President, Md. Nurul Islam and Showkat Ali Sarkar respectively. Chevron Bangladesh was represented by President, Neil Menzies, and Director of Policy, Government & Public Affairs (PGPA), Ismail H. Chowdhury.

The U.S. Trade Show presents an opportunity to showcase high-quality products and services brought by American companies to Bangladesh, recognizing the role of these corporations in Bangladesh’s economic development. The two countries already have strong trade and investment ties. According to the United States Census Bureau, total two-way goods trade between the two countries in 2018 amounted to $8.2 billion. U.S. goods imports to Bangladesh totaled $2.1 billion (up 43% from 2017), and top products were power turbines, soybeans, dredges and other heavy machinery.

U.S. Ambassador Miller said that Bangladesh is now playing a greater role on the regional and global stage, and there is much more interest on what is happening in the country because “the opportunities here are absolutely enormous”. He added that he would work to bring U.S. trade delegations, U.S. trade missions and American CEOs to visit Bangladesh over the next three years to strengthen trade and investment relations between the two countries. Such delegations usually visit Beijing and New Delhi in the region, but the Ambassador now wants them to visit Dhaka as well to explore business opportunities. He said the potential in Bangladesh’s burgeoning market of more than 160 million consumers is significant and credited the “entrepreneurial energy” in Bangladesh and the energy in the private sector for driving the country forward. Mr. Menzies said, “Reliable, affordable energy is an important foundation for Bangladesh’s vision for the future.  Chevron is proud to play an important role in partnering with Petrobangla and the Government (of Bangladesh) to power the nation’s growth. Our hope is that the U.S. Trade Show facilitates further investment and partnership to drive Bangladesh’s growth story, which Chevron is proud to support.” 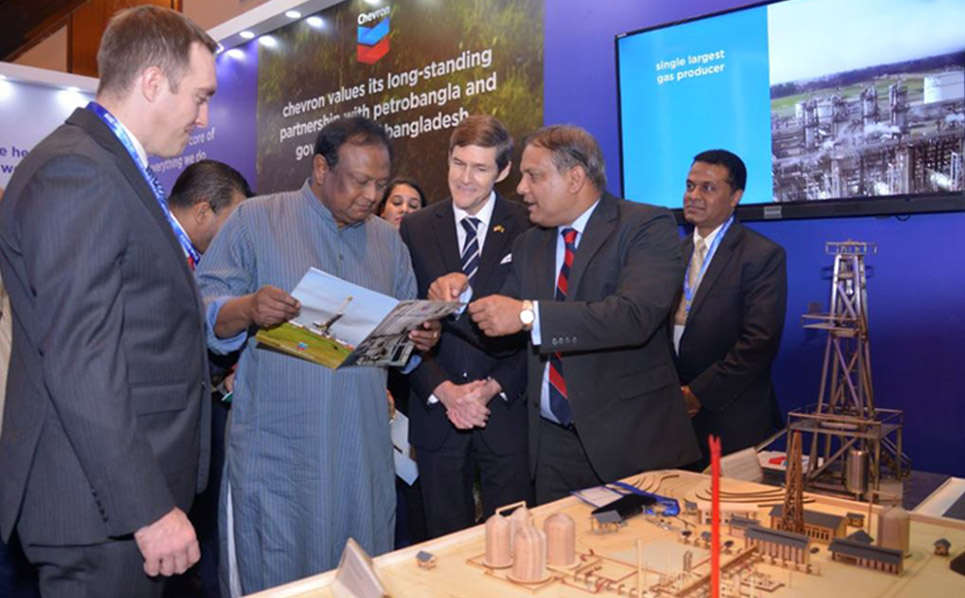