DHAKA, Bangladesh, March 6: Chevron Bangladesh President Neil Menzies officially inaugurated a multi-year community road safety awareness program recently at the premises of the Bibiyana Gas Plant. The program, implemented by Skills-Craft Associates, will emphasize vehicles and drivers operating on two major thoroughfares near Chevron’s Bibiyana and Moulavi Bazar facilities in Nabiganj and Srimangal Upazilas respectively. According to the 2018 Global Status Report on Road Safety released by the World Health Organization (WHO) last December, the number of WHO-estimated road traffic fatalities in Bangladesh stood at nearly 25,000 in 2016.

Chevron’s program is intended to build awareness on safe road behaviors and build drivers’ defensive driving skills, with a goal of reducing traffic accidents. Two-day training and knowledge sharing sessions in both catchment areas will be available to 300 drivers of three-wheeler auto-rickshaws and light delivery vehicles. In addition, half-day sessions will be organized to summarize the training content for 200 people, including respected members of the local community, transport associations, educational institutions, etc. Some of the programs will cover a range of topics including traffic laws and signage, on-road demonstrations and driving coaching, causes of collision and collision prevention techniques, and consequences of speeding and over-loading.

Mr. Menzies distributed certificates to the first group of 30 Nabiganj-based drivers who successfully completed the two-day training session. Speaking on the occasion, he lauded the initiative, as it taps into the need for the community to increase awareness of safe driving and pedestrian behaviors. He further expressed the hope that the current project will build on the success of Chevron’s previous three-year program with BRAC, which provided defensive driving training to 1,000 drivers of highway buses, trucks and local non-motorized vehicles operating in the Bibiyana area. Mr. Chowdhury stressed on the importance of safety and mentioned Chevron’s exemplary record of safety in all aspects of its business, including fleet management – nearly 16 million kilometers driven without a major motor vehicle crash. He said, “Beyond the perimeters of Chevron’s facilities, our vehicles share communal thoroughfares with other road users. Therefore, awareness of safe behaviors for drivers and pedestrians alike will ensure that everyone returns home safely to their families every day.” 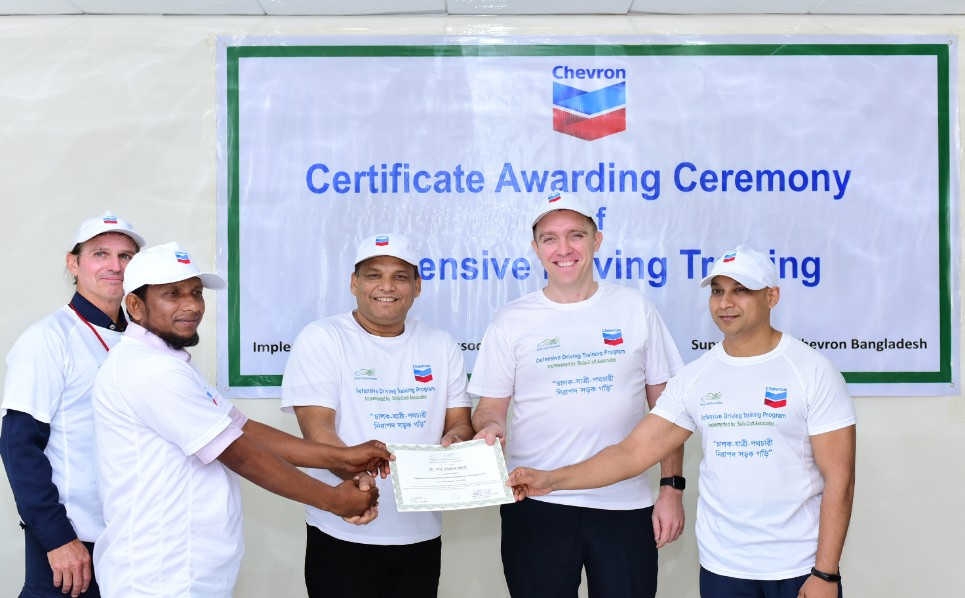